Military knife collectors will be familiar with the “Boer War jack knife” that has long been assumed to have been supplied to Australian military forces serving in the second Boer War in South Africa from 1889 – 1902. Recently I have been involved in a discussion regarding a series of clasp knives produced by Thomas Turner & Co and included in their 1902 catalogue, as shown on the following illustration:

The best known of these is the knife shown on the right which is the “Lord Mayor’s Own” knife pattern 6041 which in fact was a “private purchase” item paid for by the City of London and supplied to the “City Imperial Volunteers”. There is also a commercial version of this knife that was identical in construction (i.e. spearpoint blade, brass liners, and nickel silver shackle/bail) manufactured by Thomas Turner and others, the only difference being that the blade stamping was “The Lord Mayor Knife”.

What has recently become apparent is that there was also a military contract version of this knife – the difference being that it has a sheepfoot blade, steel liners, a copper shackle/bail, and no stamping on the knife blade. Another important distinction is that there are example known that have the W/l\D stamp (and number) overlaying the maker’s name on the tin opener. Further, examples of the other three patters are known both with and without the W/l\D stamp, with the possible exception of pattern 6143 (known as the “Baden Powell” knife and very rare) where the only known examples don’t have such stamp. Also, a single blade version has been noted having the same general characteristics as these four clasp knives (i.e. 4 inches in length closed, stag scales, steel liners, and probably also a copper shackle/bail) which also has evidence of a W/l\D.

The first photo following is of the presumed military contract version of the “Lord Mayor’s Own” knife, note the W/l\D 3 STAMP on the tin opener, and the second photo is the only know example of the singe blade version- which has the W/l\D stamp on the pile side tang. 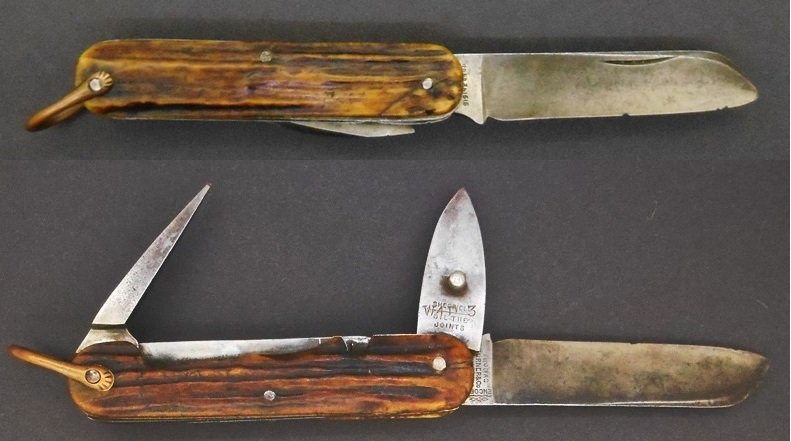 A collector from Victoria who has a small collection of such knives, is keen to explore the possibility that these were an issue knife to Australian servicemen serving in the South Africa campaign. And he has requested my thoughts on this matter. I have suggested that a good starting point would be to see if there are other known examples of these five knives (i.e. the four shown in the catalogue illustration and the single blade version) in collections in Australia, and if so – whether there are any known connections to Australian servicemen?

Any information on any of these knives, including photographs of knives and their stampings and possible provenance would be appreciated; please .