The following clasp knife sold on Ebay on 19 Feb 2009.
I have no reason to doubt the description. If it is correct, it is a wonderful little piece of history.
The description for the knife was :

Knife has 3 functions to it
1: large knife
2: smaller knife
3: can puncher 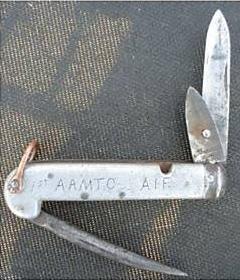 This knife does not comply with any of the known patterns of clasp knives approved for issue to British soldiers during WW1. I am only aware of a single pattern with metal scales, the pattern 9401/1917 Clasp Knife, and that designation has been attributed to a different knife.

There are two possible explanations for this knife.

If anyone has any information about any WW1 knives issued to, or used by Australian Servicemen or Women; please .